The Morphy Richards Folding Stand Mixer attempts to address the biggest problem with owning a stand mixer: where do you store it? Some fortunate people with large kitchens are able to leave their kitchen machines out on the counter-top permanently. If this isn’t a possibility then reserving a large chunk of valuable cupboard space for an appliance can be difficult.

To overcome this problem, Morphy Richards have developed a stand mixer which folds down into a small metal tin and is therefore much easier to store. The low sales price seen at this store has recently made this appliance ever more popular. Our Morphy Richards Folding Stand Mixer review will address if the foldability handicaps its ability to function as a quality mixer. 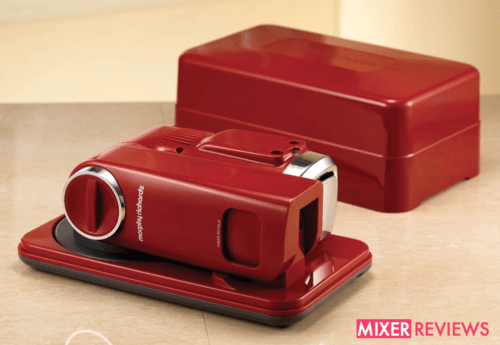 The Morphy Richards Folding Stand Mixer collapses to a remarkably small size, but is it a good mixer? Our review will find out.

If you’re new to the Morphy Richards Folding Stand Mixer then I’d recommend taking a look at the below video first to introduce you to the unique folding action and the other key facts about it. 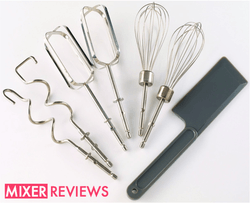 So as you’ve heard, the appliance comes with the standard set of three attachments, beaters of cake mixtures, whisks for eggs and creams and dough hooks for, well, doughs. The attachments themselves are of the skinny duel type that you’d typically see on a hand mixer, not the single chunky, heavy attachments you may expect on a stand mixer. These attachments are also secured to and ejected from the machine with the same push and click motion you’ll be familiar with from handheld units. This is more of an aesthetic issue than anything else, but could indicate an underlying lack of power. 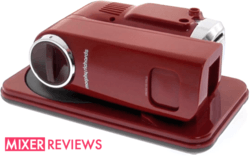 Of course by far the best and biggest feature of this appliance is the fact that it folds down to a remarkably small size. The folding action is best seen in the video above, but I can say that it’s just as easy to do in real life. When it’s folded, the footprint of the machine is only 30cm by 20cm and not very tall at all, so finding space in the cupboard should not be too difficult a task. The metal case that fits over the top of the folded unit is branded with the Morphy Richards name and looks very classy.

Note: If you’re not keen on this folding feature then consider a non-folding machine in the same price bracket, like the Andrew James 5.2, as the Morphy Richards has to compromise on some aspects to achieve the folding action.

The machine comes with a 300W motor, which seems underpowered, particularly when compared to the Morphy Richards Accents stand mixer, their other popular unit that comes with a respectable 800W motor. This lack of power is evident when you read the instruction manual for the first time and it reads:

Not suitable for heavy dough

However, it’s still fine for pastry dough and cookie dough (up to 350g of flour), just don’t attempt bread doughs or you risk overheating and damaging the motor and drive mechanism. For standard mixing tasks with the beaters and whisks, the instructions say that you’re allowed up to 1kg of ingredients, so the 300W’s should really only be a deal-breaker if you must use your mixer for kneading bread.

The 3.5 litre bowl rotates as the attachments rotate, but does so in the opposite direction to help achieve a better mix. The machine does a reasonable job of this if left to its own devices. However, for best results we’d recommend that you watch the mixture and slow the bowl or use the provided spatula to fold in ingredients that are missed as appropriate. The 3.5L bowl has more than enough capacity for the amount of ingredients you’re likely to want to use.

The appliance has 6 speeds, but doesn’t have a pulse mode and the bottom speed is actually quite fast, so it’s not as good at delicate tasks as some of its competitors.

The largest drawback with this mixer is its lack of a splash guard/ splatter guard over the bowl. Particularly as all the speeds are quite fast and the bowl isn’t as tall as others, if you’re not careful you can cover both yourself, the appliance, and the kitchen in projectile ingredients. This does mean that there’s one less item to store though.

On the positive side, both the bowl and all of the attachments are dishwasher-safe. Also, because the attachments are ejected at the push of a button there’s no faffing when trying to remove slippy, ingredient-coated beaters, which is often the case with these machines.

The Morphy Richards Folding kitchen machine is really quite noisy on any of the speeds. It’s more noisy than we might expect because the ‘low’ speeds are actually quite fast. We’d struggle to hold a conversation at all while the machine is in use. This is more of an annoyance than a reason not to purchase the appliance though.

We’ve seen how small it can be when folded down, but even when the machine is in use it only measures 30.0cm long by 20.5cm deep by 26.5cm tall. This is roughly 30-40% smaller than typical stand mixers. This makes it ideal for use in kitchens where worktop space is an issue.

In addition to its small size and compact storage, due to the largely plastic construction and the smaller motor, this mixer is extremely lightweight when compared to the competition, at only 2.4kg out of the box. This is roughly half of what we’d expect. The low weigh is great at it means lifting the box into cupboards is easy and there’s no excuse for dropping it as you’re doing so. 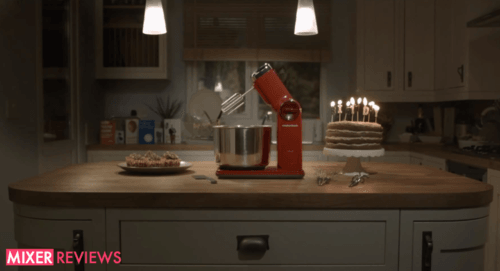 The Morphy Richards Folding Stand Mixer will look great in any kitchen.

Despite the quirky folding action, we think that the design of the machine is appealing. This is largely because it is quite small and slim, whereas most mixers in this price range are large, bulky boxes. The red colour is also appealing, although it is also available in white and cream under the following product codes – see pictures below:

The best way to look after your appliance is to never exceed the ingredient limit of 1kg for all tasks other than doughs, and 350g of flour for dough mixtures. This is particularly important given the smaller motor. Provided that you keep within these limits then the 2-year guarantee will protect you against any unlikely manufacturing defaults. Just remember to register your product with Morphy Richards within 28 days of purchase to quality for this extended guarantee, otherwise there’s only a 1-year guarantee to protect you.

This is a unique product in the market and the folding action and small size doesn’t demand too many compromises in power or functionality. At the time of writing there’s and incredible discount available at this store on these mixers (in any colour), making the machine good value for money.