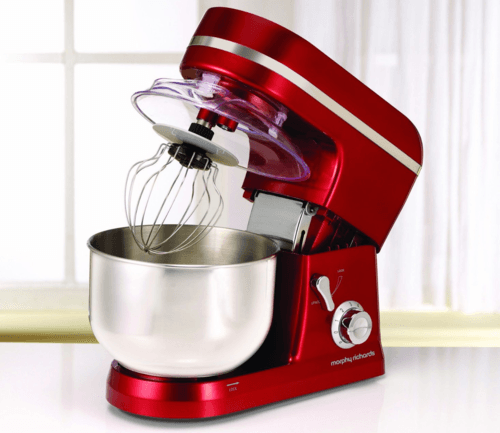 For a brief overview of the features of the machine, the below video is great.

The machine comes with the three basic bowl attachments that you’d expect. Namely, a whisk for egg whites and creams, a beater for cake mixtures and a dough hook. It was slightly disappointing to find no flexible beater blade, which can be useful to pick up sticky ingredients from the sides of the bowl. It’s not possible to purchase one separately either. 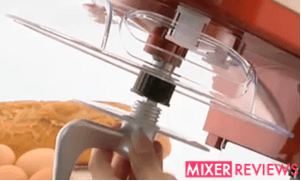 The bowl attachments are secured to the mixing head by pushing the attachment up into the fitting and then screwing down the plastic cap. This holds the attachments very securely, but it is a little more fiddly than we are used to.

As you may expect at this end of the market, there are no other power outlets on the machine to attach additional functions like meat grinders, pasta rollers and blenders. But if that’s what you’re looking for then a Kenwood is really the answer.

It isn’t mentioned anywhere in the sales blurb, but the maximum weight of ingredients that Morphy Richards recommend is 1.5kg. This is fairly low, particularly as it boasts an 800W motor. For example, every other stand mixer I can think of allows for well over 2kg of cake mixture. Other manufacturers split the maximum weights out for different ingredients, but Morphy Richards have opted for just one blanket figure. With this in mind, we would play it by ear with how much ingredients to use. For example, claggy doughs are harder to mix than a light cupcake mixture, so you may wish to use a lower weight of ingredients for the dough. Having said all this, 1.5kg is still enough to cover most of the recipes you’re ever likely to follow, and if you’d like to try a particularly big bake you could mix it in 1.5kg batches.

The 5-litre stainless steel bowl is a nice feature and is plenty big enough given the weight restrictions discussed above.

The speed dial gives you six speeds to choose between, which is the industry standard. The machine doesn’t move gradually between the speeds, but the splatter guard prevents this from becoming an issue. The pulse mode uses the highest speed but springs back to ‘0’, allowing precise control when required (e.g. when creaming) – a very useful feature.

The Morphy Richards Accents stand mixer comes with a splash guard, which is probably the most important feature when it comes to minimising cleaning. There’s a chute (read: hole) for ingredients to be poured in without having to lift the mixing head. While there’s no lid for the chute, in practice you’ll find that ingredients very seldom find their way past the guard. The splatter guard is easy to remove and fix; you simply push it on.

The bowl, being stainless steel, is dishwasher safe. However the attachments and splash guard are not, so you’ll have to clean these in the sink. The machine is easy to wipe down.

As you can hear in the above video, the stand mixer is noisy. Forget having conversations in the kitchen while the machine is on, and that applies to low speeds too. The sound it produces is almost like a grinding sound, which isn’t very pleasant. However, this being said, machines that are quieter than this one can cost twice as much, so it would be harsh to lambast it too much in this area.

The Morphy Richards Accents stand mixer is surprisingly light, weighing just 4.2kg out of the box. This puts it on a par with the lightest stand mixers around, such as the Kenwood Prospero KM283. This makes it a great choice if you’ll be storing the machine in a cupboard when it’s not in use, as lifting a heavy stand mixer in and out of a cupboard is a difficult task for most people.

The appliance also has a relatively narrow footprint of just 13.5cm wide (not including mixing bowl) by 37cm long. It measures tall 23cm from the worktop. 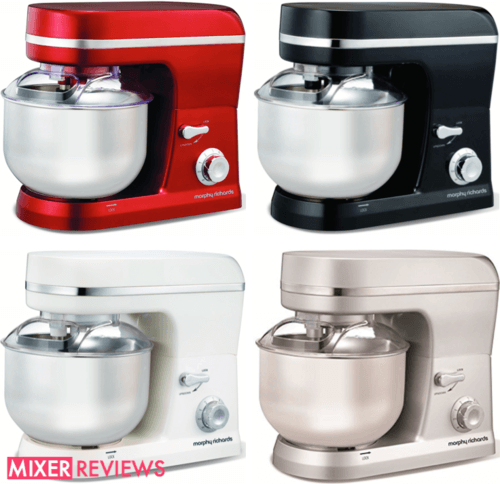 The Morphy Richards Accents stand mixer is available in four different colours. Each colour has a different product code:

Red is by far and away the most popular colour and it is our favourite colour for this particular appliance too. The silver looks cheap, so we suggest that you avoid this one, but the rest is down to personal preference. In case you were wondering, we have absolutely no idea why there are two codes in circulation for the red and black units.

For the price paid, the appliance looks pretty good in any colour and we’d be happy to keep one out on the counter-top permanently if desired.

The Morphy Richards Accents stand mixer comes with an impressive two-year guarantee. BE CAREFUL though, this two-year guarantee only applies if you register your product with Morphy Richards within 28 days of purchase. If you don’t register your product within this deadline then a one-year warranty applies, so it’s worth setting yourself a reminder when you order it.

There are two very important instructions Morphy Richards give that should always be followed to ensure the life of your mixer is as long as you’d like it to be. Firstly, don’t go beyond the 1.5kg ingredient weight limit. Secondly, the maximum amount of time the machine should be run for (at any speed) is five minutes. After these five minutes Morphy Richards say that you should leave the machine to cool down for ten minutes before resuming. Five minutes should be enough time for almost any recipe, but it’s still something you must watch. Ignoring either of these limits will likely cause your machine to overheat, which degrades both the motor and drive mechanism.

If you choose the Morphy Richards Accents stand mixer you can rest assured that you’re buying a machine of reasonable quality and mixing performance. If you’re happy to spend a bit more then the Kenwood KM336 could be a better choice. If not then it’s between this model and the Andrew James 5.2. Thankfully the recent price drop of the Morphy Richards at this store has made the choice a lot easier, so check that out and enjoy.