The Kenwood Prospero KM283 is Kenwood’s lowest priced kitchen machine (the best sales price we could find was at THIS STORE). Many bakers have an aspiration to own a stand mixer from this brand, and with such attainable pricing it has proven to be a top-seller. However, there’s got to be a reason why the Prospero is priced so low. This Kenwood Prospero KM283 review will see whether a bottom-end Kenwood Chef or other cheap stand mixer would be a better choice. 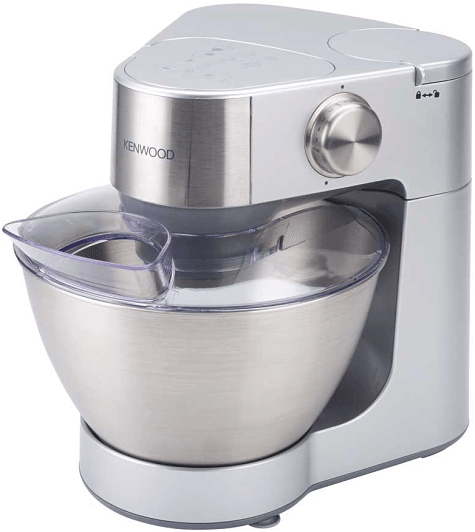 Note the unusual triangular shape of the Kenwood Prospero

Features & Accessories Of The Prospero 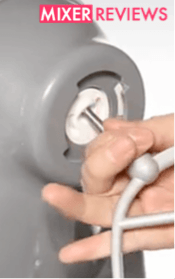 This unusual design was probably required to accommodate the unusual planetary mixing pattern. Rather than the mixing attachment being held vertically and the whole head of the bowl outlet rotating, like most other stand mixers on the market, the Prospero’s mixing attachments tilt to ensure they cover all of the mixture. This is why you’ll notice that the mixing attachments of the Prospero are wider than the those you’d find on any other Kenwood kitchen machine, because otherwise, due to the tilt, the middle of the mixture wouldn’t be mixed properly. This quirky design feature was required to reduce the size of the machine and so long as you stick to the minimum batch sizes, it shouldn’t produce anything less than a top quality mix.

Moving on to the actual mixing attachments themselves, you get just the standard three:

There isn’t a flexible beater blade and you can’t purchase one separately. However, the unique tilted mixing action ensures that the edges of the bowl are mixed well anyway, so this isn’t much of an issue.

A fantastic feature of the Prospero KM283 is that even though it’s a budget stand mixer, it has additional power outlets to turn it into a true ‘kitchen machine’:

So there aren’t as many attachments available as with the Kenwood Chef range, but this machine has all of the important bases covered and comes with the food processor and blender included, which is generous considering its price-point.

The Prospero KM283 comes with a splash guard and pouring spout. This is easy to fit, but due to the hole that is left at the back of the bowl and the hole for the pouring spout, could have been better designed.

The 4.3 litre mixing bowl feels top-quality as it’s solid stainless steel. However, despite the bowl-size being similar to competing models, the maximum mixing amounts are much lower:

The large bowl is required because the tilted mixing head causes mixtures to rise higher up the sides of the bowl than a standard stand mixer.

The speed control on the Kenwood KM283 is excellent, with a solid-feel to the rotational dial and a very smooth transition through the speeds. There’s a pulse mode too, should you wish to use that for delicate jobs.

The motor is 900-watts, which is slightly more powerful than the lower-end Chef range (800W), which seems strange to me as that would be the more ‘premium’ choice. My only guess is that this extra power is required to overcome the engineering drawbacks (e.g. increased moving parts and friction) of the unusual tilted mixing method discussed above.

Also, the pouring spout doesn’t come with a covering flap, like those seen on other Kenwood models, so mess can flick out of the bowl here too.

This is particularly important with the Prospero KM283, as due to the tilted mixing action, mixtures get pushed higher up the sides of the bowl than they do with the standard action.

While the above points are valid, they shouldn’t put you off too much because in reality, particularly with the smooth speed control, not too much ends up outside of the bowl.

It certainly isn’t the quietest mixer, and with a powerful 900W motor it was never going to be. It is quieter than other mixers in its price-class however, which is a good indication of the build-quality of this kitchen machine.

On maximum speed I wouldn’t bother attempting a conversation or listening to the radio, but both of those things would be possible, albeit at an increase volume, with the machine at a medium speed.

The Kenwood Prospero KM283 is aimed squarely at those people who don’t have a great deal of space in their kitchen, and Kenwood have done a fantastic job at designing it to fit on the smallest of possible footprints.

It measures 31.3cm wide, by 24.3cm deep, by 29.2cm tall, which makes it the smallest proper stand mixer available and ideal for keeping out on the counter-top on a permanent basis.

It’s also remarkably light, particularly considering that it is housing that powerful motor, weighing in at a featherweight 4.5kg. This again makes it the lightest proper stand mixer on the market and a breeze to lift in and out of cupboards. 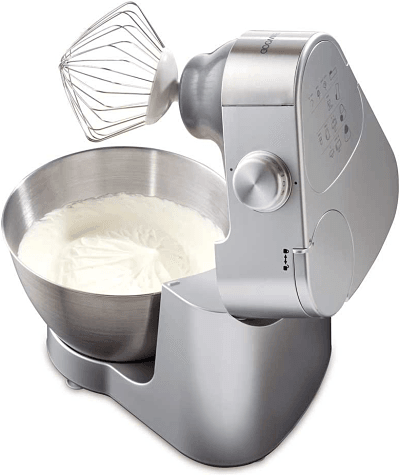 The Kenwood Prospero KM283 should look fantastic on any kitchen worksurface

One of the great things about the KM283 is that despite its lower price tag it still retains a premium feel and looks like a ‘proper’ Kenwood.

All of the outer casing is plastic, however it feels of good quality and the silver colour doesn’t make it look tacky, like brighter colours can.

That solid stainless steel bowl really is lovely too.

The biggest question mark regarding the durability of the Prospero KM283 is that odd tilted mixing style, which requires a non-standard gearing mechanism. I believe that this is the reason Kenwood have had to reduce the maximum batch sizes (listed above) down so considerably. Assuming that you keep within these, then I don’t see why anyone should experience durability issues.

At the end of the day, this is a Kenwood mixer and I am sure that they aren’t going to risk spoiling their rock-solid reputation for reliability by producing a poorly designed model. Indeed, the vast majority of reports are positive, so I don’t think there are any concerns here. What is a shame is that as with all cheaper Kenwood models, they’ve only included a 1-year warranty with the KM283.

If you are short of space or are specifically looking for a smaller mixer then the Kenwood Propero KM283 really is the perfect choice. If you’re just looking for a general purpose mixer, then you could consider stretching to the KM336 Chef Classic, but still, so long as you’re OK with the batch sizes the Prospero isn’t going to let you down. However, be very careful not to overpay on the machine, as we’ve seen some ridiculously big reductions at this shop, so be sure to take a look.