The Kenwood kMix hand mixer review was our first ever video mixer review, so apologies for the poor sound quality. This review was conducted on the very hand mixer that our family has used for well over 5 years, so we’re in a great position to inform you about the pros and the cons of this top quality hand mixer.

You can almost always grab the kMix hand mixer at a large discount at this shop, so it is worth checking if your favourite colour is currently on sale.

If you’d prefer to read rather than watch the kMix hand mixer review or would like some more detail, then please read on! 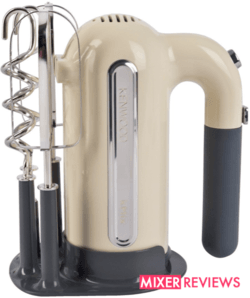 The Kenwood kMix hand mixer comes with beaters and dough hooks. This is actually less than many other hand mixers, which typically also come with egg whisks. However, we’ve found that the kMix beaters do an absolutely terrific job of whipping cream and beating egg whites, so whisks would be redundant anyway. I think a lot of manufacturers include whisks as a tick-box exercise to look better value than the competition, rather than to actually add value to the customer.

One of my favourite things about this hand mixer is the way the attachments lock into place. There’s a solid clunk when the attachments find their mark and they are held in place so strongly that you’d believe they were permanently attached.

Inside the unit is a top-quality 350-Watt motor. Some stand mixers we review have 350W motors, and even the very pricey kMix stand mixer only has a 500W motor. So rest assured that this hand mixer can easily handle most, if not all of what you’re likely to throw at it.

Even with this powerful motor, there are a couple of recommended limits that Kenwood discuss in the instruction manual and we’d suggest that you stick to these limits to keep your appliance running sweetly. Kenwood recommend that when dealing with heavy mixtures the appliance is not run for longer than 3 minutes in every 5 minute spell. They also say that dough mixtures shouldn’t have more than 400g of flour. 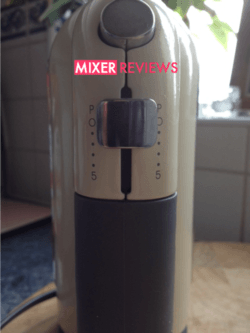 There are 5 standard speeds to choose from. These are easily selected with your thumb on the handle. There is just the right amount of resistance between the speeds, which means that you don’t jump from speed 1 to 5 inadvertently, which can easily happen with some hand mixers. Thankfully, Kenwood have put some thought into the correct speed for each setting. Often with hand mixers you’ll find that the lowest speed is far too fast and the highest speed isn’t fast enough. With the kMix there’s an appreciable difference between each speed, meaning you actually use each speed as and when is appropriate. The lowest speed is low enough for delicate or heavy mixtures and the highest speed, as you see in the video, whips the mixture into a frenzy. There’s also a pulse mode, which you activate by pushing the speed selector away from your hand. The speed selector bounces back to ‘off’ when you release the pressure and the mixer runs at a high speed when the button is pushed up. We mainly use this feature when whipping creams. 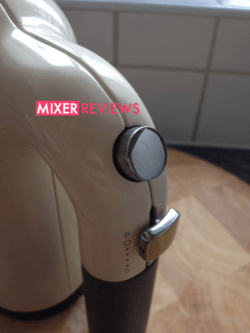 The Kenwood kMix hand mixer couldn’t be any easier to clean. Push the round button on the top of the handle and the attachments fire out. ‘Fire out’ sounds a bit dramatic, but in reality this isn’t an exaggeration, so it may be worth holding on the the ends of the attachments so that they don’t fly off.

The beaters and dough hooks are 100% stainless steel, so they can be put in the dishwasher or just hand washed. The body of the mixer just requires a wipe down with a wet cloth.

The mixer doesn’t tend to flick ingredients away from the mixing bowl, so there generally isn’t an awful lot of cleaning up required.

I normally find describing the noise that a mixer produces on the various speeds quite tricky, so I’m thankful to have the video this time to back up what I’m saying. Despite having that powerful 350W motor, the kMix hand mixer really is very quiet, considering just how quickly the beaters are rotating. As you see in the video, I can easily hold a conversation with the camera, even on the highest speed. The quietness will be mainly due to the quality of the motor, which is far beyond the average hand mixer and also due to the insulating effect of the aluminium casing.

Interestingly, despite the kMix being one of the most expensive hand mixers available, it is also one of the most compact. Standing on its base it measures about 19cm tall, by 14cm wide by 8cm deep.

Thanks to the solid die-cast aluminium casing it is about 0.5kg heavier than most plastic mixers on the market, weighing a total of 1.5kg. However, this is still pretty light and the weight is distributed so that it balances nicely in the hand when being held horizontally (the mixing position). Using aluminium for the body, rather than steel was a sensible move to keep the weight down. 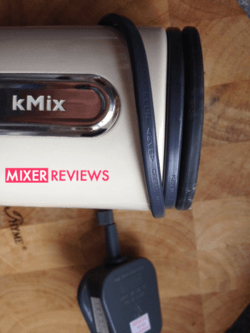 Cable tidy is too small for all of the power cord

On the bottom of the appliance is a place to wrap the power cord around, which keeps the cord out of the way when you’re mixing and keeps it tidy during storage. The annoying thing about this is that it isn’t large enough to take all of the cable, and so you still have 18 inches or so that needs to be wrapped around the body of the appliance.

The Kenwood kMix hand mixer comes with a rather cheap grey plastic stand that also has room for the beaters and dough hooks. We don’t have a use for this, but if you wanted to keep the appliance out on your worktop then it could be handy to have a place to keep the beaters and mixer together.

There’s no denying that the Kenwood kMix hand mixer is a fantastic looking machine. Its compact, non-fussy design, metal body and ridiculous range of paint coats sets it apart from any other hand mixer. With that die-cast aluminium body it also feels the business. The grey rubberised handle surprisingly doesn’t detract from the attractive paint job as it sits flush with the rest of the bodywork.

As I mentioned, there is a ridiculous array of colours that the kMix hand mixer is available in and to make matters a little more confusing, each comes with its own product code. I’ll list them all out below: 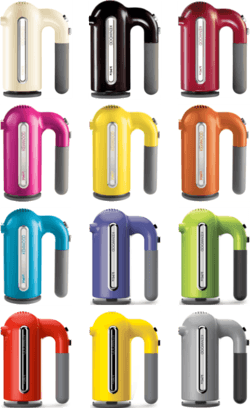 To get the best deal it’s worth being flexible about colour.

As I’ve mentioned, we’ve had our kMix hand mixer for at least 5 years (I can’t quite remember when we bought it). During those years it has been our only hand mixer and has taken some serious abuse in the form of heavy fruitcake mixtures and prolonged whipping but has not yet missed a beat. This seems to be the consensus of all those who own one of these machines.

Disappointingly it only comes with a 1-year guarantee, which is the same as most Kenwood mixers. But the quietness of that motor (a big indicator of quality) and the rave reviews mean that you certainly shouldn’t be put off by this.

The Kenwood kMix hand mixer is the best hand mixer on the market by a big margin. It really is in a league and market of its own. No other hand mixer comes close to the quality, power and durability of this machine. Buy it for the ‘sale’ price often seen at this store and you’ll be picking up quite possibly the only hand mixer you’ll ever need for the price of a few days grocery shopping.