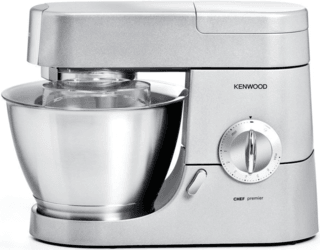 The Kenwood Chef Premier KMC570 stand mixer is another premium, multifunctional kitchen machine from Kenwood, the brand which dominates this market. At the time of writing the KMC570 is the best-selling stand mixer on the market due to the huge reductions seen at this online shop, so it’s certainly time we gave the machine a closer inspection.

The ‘Chef Premier’ sits above the ‘Chef Classic‘ range, which gives it the ‘KMC’ initials, rather than just ‘KM’ of the Classic Chef range. But the ‘Chef Premier’ sits below the ‘Chef Major’ & ‘Chef Titainium‘ models. There isn’t a great deal that separates each range (other than price!). For example, the only differences between this model and the cheaper KM336 are:

In this Kenwood KMC570 Chef Premier review we’ll review it on its own merits and against the other models in the Kenwood range to see whether it represents a good buy. 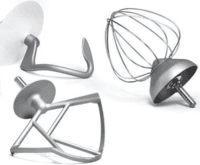 One of the great things about stepping up to the Chef Premier range is that the models within this range come with four attachments, rather than the standard three. This gives you the K-beater, egg whisk, dough hook and the added benefit of a creaming beater with flexible sides. The flexible sides of the creaming beater allow the beater to essentially ‘lick’ the sides of the bowl clean as it sweeps by, resulting in a well-rounded mixture with no extra effort required. No more manually folding in the ingredients at the side of the bowl using a spatula. Rejoice!

Like with all Kenwoods, the attachments are completely rock-solid when locked into place through a simple push and twist motion.

We’ve focussed on the flexible beater blade, but even with one of the other attachments in use, the tools rotate very close and evenly around the edges of the bowl, resulting in ingredients that are quickly combined. Thankfully you are able to adjust the height that the attachments spin at using the spanner Kenwood provide. This allows the attachments to be set perfectly, just above the bottom of the bowl.

The 1000-Watt motor is more than powerful enough for the ingredient maximum limits that Kenwood set. One frustrating thing about the KMC570 is that despite having 200 more Watts to play with than other models in the Kenwood Chef range, this model still has to abide by the same maximum ingredient weights as the 800W mixers. What’s the point of giving it a more powerful motor if it can’t handle any more ingredients? The maximum ingredient limits are as follows:

As you’d expect at this price-point, the 4.6L bowl is stainless steel rather than plastic. Even when mixing ingredients at the maximum ingredient limits of this machine, the 4.6 litre bowl is plenty big enough. 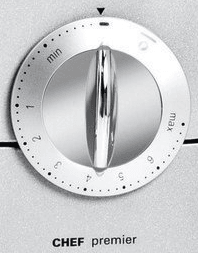 The speed dial feels a bit cheap for this price of machine. The models above this one have a chunky knob rather than the thin disc with a bit that sticks out seen here. There’s enough resistance between the speed notches to prevent increasing the speed too quickly for all but the very heavy-handed, but again, the more expensive Kenwood mixers do this better. 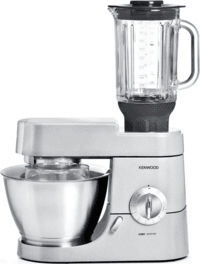 The Kenwood KMC570 comes with 3 power outlets, namely, high speed, low speed and the bowl outlet, of course. Some of the higher-end Kenwood mixers have a medium speed power outlet, which runs the food processor attachment. However most jobs can be accomplished with tools that attach to the slow or high speed outlets.

Aside from the bowl tools you also get a heat resistant blender for use with the high speed power outlet. This blender works brilliantly, so you could create some space for the Kenwood by getting rid of your old stand-alone blender. The blades separate from the glass jug when required for easy and safe cleaning.

Of course the KMC570 can be fitted with a vast array of additional attachments, listed below.

For the low speed outlet:

For the high speed outlet:

For the bowl outlet:

Just be aware that these cost at least £30, and can be upwards of £100 for the really fancy tools. I spend hours salivating over all the options on this website!

The included splash guard fits securely to the mixing bowl and has a hinged lid on the ingredient chute, which will be appreciated by those of us who aren’t quite as delicate with the speed dial as perhaps we should be…

Wipe the unit down with a damp cloth after use to prevent any grease building up. Although if you use the splash guard the body of the KMC570 should stay pretty clean. The attachments are easy to remove even when dirty thanks to the circular plastic guard at their base. The bowl and mixing tools are dishwasher safe for easy clean up, but unfortunately the splash guard is not dishwasher safe, so you’ll need to remember to wash this by hand.

This is not a quiet mixer. Holding a conversation over the noise of the machine on anything but the lowest of speeds generally isn’t worth the effort. Thanks to the solid die-cast aluminium body it is a little quieter than the plastic bodied KM336, but that alone wouldn’t justify the price difference.

The power of this machine means that it makes quick work of tasks, so I suppose at least you aren’t bothered by the noise for very long.

This isn’t as heavy as the traditionally shaped KitchenAid mixers, nor the ‘Major/ Titanium‘ Kenwood range, but at 8kg and measuring nearly 40cm (15″) long, the Kenwood KMC570 is still quite a bulk to store in a cupboard and is not easy to lift in and out. 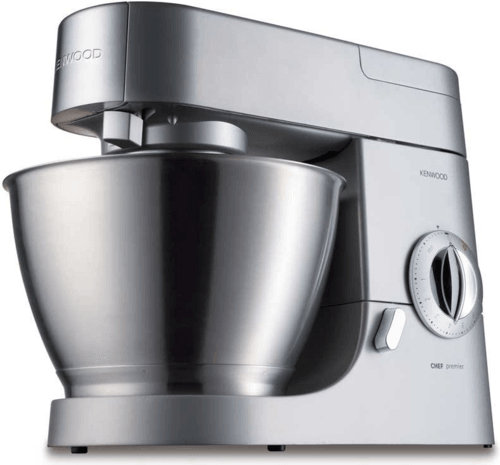 With a solid aluminium body shell, the KMC570 is fit for any kitchen

The KMC570 looks almost exactly the same as every other Kenwood Chef, Major and Titanium. But don’t get me wrong, that’s a positive, rather than a negative. It has a ‘professional’ look about it, with the silver colour and cuboid form.

The only negative in this area is the slightly old fashioned looking plastic circular speed dial, rather than the solid knob of the models that sit above this one.

People are often shocked by the comparatively short warranties that come with the Kenwood Chef range of mixers. In fact, the KMC570 comes with a measly 12 month warranty. Don’t let this put you off though, the relatively short warranty length isn’t a reflection of the durability of the machine. Our theory is that Kenwood do this to create more of a perceivable gap between the Chef and the Major range, which come with an impressive 5-year warranty.

I don’t want to repeat what’s already been said about the durability of Kenwood mixers or I risk being accused of being on the Kenwood pay roll (I wish!). But what you’ve heard of these machines lasting decades is both true and is in fact commonplace.

The Kenwood KMC570 Chef Premier is no doubt an excellent mixer. Why I’m struggling to summarise my thoughts into a coherent concluding statement is because there is so little difference each Kenwood mixer in both the Chef and Major/ Titanium ranges. Once you’ve decided on a Kenwood mixer, what your decision should really come down to is what you’re happy to pay. At the time of writing the KMC570 is actually topping the sales charts due to a huge reduction at this store. Click to see if that reduction is still available, otherwise, make sure you browse the prices of the various closely-related Kenwood models to see if there are any other bargains that say “buy me”.