The Duronic SM100 stand mixer can be found at one store for a frighteningly low price (SEE PRICE HERE) and was therefore crying out for a good probing review. Everyone is searching for a bargain these days, but at the same time nobody wants to suffer buyer’s remorse after buying a machine that isn’t up to the task. This Duronic SM100 review will test the machine to the limit. 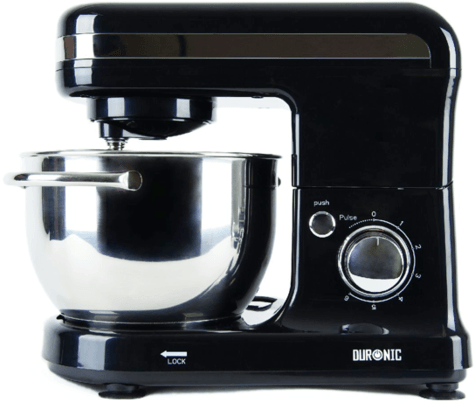 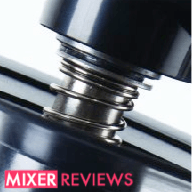 The external pin and spring to affix a mixing attachment

The Duronic SM100 comes with the three basic mixing attachments, which are securely attached to the mixing head through a push and twist motion, similar to a bayonet-style light bulb.

The plastic beater and whisk both have a cheap feel to them, but at least they’re somewhat hidden from sight in the mixing bowl.

There are no additional mixing attachments that you can purchase, like a flexible beater blade to assist with picking up sticky mixtures from the sides of the bowl. There are also no additional features available, like liquidisers, meat grinders or frozen dessert makers; this is a pure mixing machine.

The quality of the mix is good and those upgrading from a hand mixer are sure to be impressed. Even compared to much more expensive stand mixers the SM100 doesn’t reveal it’s rock-bottom price tag. Do not expect this machine to do all the work for you though, as particularly with sticky mixtures the machine is likely to struggle to pick up the ingredients attached to the bottom and sides of the bowl, so expect to have to fold in the edges of the mix with a spatula every now and again.

The SM100 doesn’t come with a proper splash guard, so be careful to move slowly one-by-one up the rotation speeds to avoid mess. Plastic guards on the mixing attachments offer some protection for the mixing head, but will not stop dry flour or splashes from finding their way out of the mixing bowl.

The stainless steel mixing bowl is 4 litres in size, which is as small as they get for stand mixers, but is still plenty big enough for all batch sizes you’re going to want to task the SM100 with. The bowl also comes with two very useful handles – it’s surprising that we don’t see more manufacturers offering this. 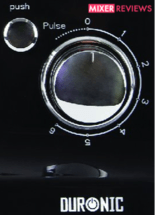 The Duronic SM100 comes with 6 speeds and a pulse mode that are selectable through a plastic dial, which is a feature-set we’d expect to see at this end of the market. The pulse mode in particular can be useful for delicate tasks.

Driving those 6 speeds is a 450-watt motor through what Duronic refer to as their “strong robust gear mechanism”. This motor is weaker than we’d like to see when you compare it to the very popular Andrew James 5.2, which has an 800-watt motor and isn’t too much more expensive. The motor is fine for medium-sized batches and whisking tasks, however if you want to be mixing large and heavy mixtures and doughs then you would be better off looking at a cheaper Kenwood model (e.g. Kenwood KM336) instead. The instructions recommend to use the mixer for no longer than 10 minutes before giving it 10 minutes to rest and you should stick to this to extend the life of your mixer.

The stainless steel mixing bowl is dishwasher-safe, however unfortunately the mixing attachments are not. The whisk, due to the central plastic spine is a bit awkward to clean but the other two attachments are a doddle to wash in the sink.

With it lacking a proper splash guard, you must be careful to turn up each speed slowly, one-by-one to ensure that the ingredients don’t end up laying on the counter top rather than in the mixing bowl.

We had hoped that with a smaller motor (450W) the Duronic SM100 would be quieter than other low-end stand mixers, however it isn’t. It’s not offensively noisy, but you can forget having a conversation in the kitchen when it’s running on anything greater than half-speed.

The Duronic SM100 is very light, at only 4kg. This is much lighter than competitors and is probably attributable to the smaller motor it carries. Despite it’s low weigh it stays firmly in place even when mixing at high speeds due to the sucker-feet the appliance is mounted on. You could comfortably keep this in a cupboard, as lifting it in and out really isn’t a lot of trouble.

The machine has a footprint of 42cm wide by 25cm deep and has a height of 35cm, which is on a par with the rest of it’s class and isn’t going to be taking up too much space, wherever you choose to keep it. 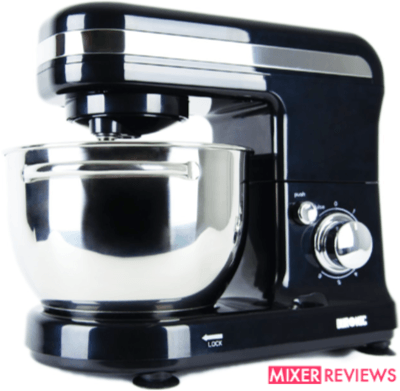 While the SM100 doesn’t look as good as more expensive models, it still looks a lot more expensive than it actually is. The gloss-black finish and silver trim keep it looking classy and I certainly wouldn’t have a problem keeping this on my counter top permanently.

Before we say anything else on durability, remember that you could buy three or four of these machines for the price of the cheapest stand mixer from one of the leading manufacturers. This means that if it doesn’t last quite as long you’re still not going to be left too much out of pocket.

The appliance comes with a 1-year warranty, but this would be our minimum expectation.

The SM100 came out in 2013 and so long-term reliability isn’t something that could be judged at this stage, although the majority of reports have been positive. You will notice that the motor gets warm, which is concerning as this will have implications for the durability of the motor, but also risk degrading the gears and drive mechanism.

Ultimately how long it lasts will come down to you. Stick within the 10-minute recommended running time, use the high speeds sparingly and make sure that you don’t try and mix too large or heavy a batch and we’d be pretty confident that the machine would be a loyal servant for a good few years at least.

Price and Final Words On The Duronic SM100 Review

When people moan about rising prices I always think of the Duronic SM100. Even just a couple of years ago a mixer of this quality at this price would have been unthinkable. Be careful where you buy it though, we’ve seen a few stores overcharging unsuspecting customers – the best price we found was at THIS STORE.