The Breville SHM2 Twin Hand and Stand Mixer is the best-selling combined stand and hand mixer on the UK market. For the occasional baker they offer good versatility between what is a good-quality handheld mixer and a stand, which allows for multitasking and makes baking a much less labourious task. The rise of the fantastic value Andrew James 5.2 stand mixer has depressed the sales of combined hand/stand units, although when found at sale prices the Breville SHM2 can still represent good value (a ‘sale’ is seemingly permanently on here). Our Breville SHM2 review will compare it against the comparably-priced stand mixers. 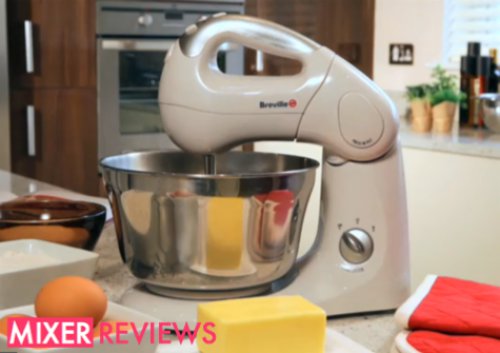 The Breville SHM2 comes with three different attachments, which are pairs of beaters, dough hooks and whisks. While this matches the varieties you’d expect to see on a stand mixer, these are of a smaller and thinner design (typically seen on some higher-end handheld machines), rather than the heavy duty attachments you might wish for. The attachments are easy to insert and held in place sturdily by the appliance.

The SHM2 doesn’t come with a flexible beater (also known as a creaming beater) and there isn’t one that can be purchased separately. To overcome this, Breville have included a flexible spatula that can be used to fold sticky ingredients into the main mixture that might otherwise be missed. The spatula also does a great job of removing the finished product from the bowl.

The stainless steel mixing bowl is 3.2L in size, so is 0.5-2 litres smaller than most on the market. The bowl doesn’t actually need to be any bigger, because the machine has a maximum capacity of 2 litres of liquid or 1kg of dry ingredients. 2L should be enough for standard whisking amounts (there is apparently 50ml in an egg), but 1kg of dry ingredients may restrict you when going for bigger bakes. It is still big enough for a medium sized bread loaf. Remember that while many ‘proper’ stand mixers can manage >2kg of dry ingredients, if the lack of capacity with the SHM2 was to be an issue for the occasional bake then you could simply mix whatever it was in batches.

The reason why the Breville SHM2 can handle less ingredients than the competition is because the motor driving the attachments is smaller, at 380W. Although it’s important to recognise that this is still very powerful when compared to hand mixers. 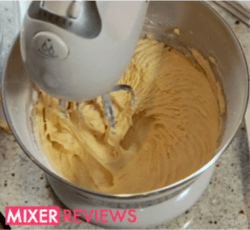 The attachments sit towards the side of the rotating bowl

It mixes ingredients like cake batters and doughs surprisingly well and could almost claim to have the much-hyped ‘planetary mixing action’, because the bowl and attachments rotate in opposite directions. The attachments sit off-centre and bowl rotates to bring the ingredients towards it to ensure that the sides are properly mixed. While this mixes the sides well, the ingredients at the very bottom of the bowl can be missed, more so than on machines with a more standard action. 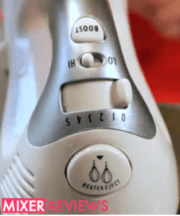 There are two bowl speeds to choose between, which are controlled by the switch on the body of the stand. The mixing speeds are selected through the menu on the top of the hand mixer unit, with 10 speeds to choose between (5 ‘HI’ and 5 ‘LO’) and a boost mode. Unfortunately there isn’t a pulse mode, which can be useful for a range of delicate tasks.

As you’ve likely already guessed, there aren’t any additional power outlets on the SHM2. There’s no ability to add additional functionality to the machine with the likes of a meat grinder, blender, or pasta roller, which are available for other stand mixers.

The biggest frustration with regards to cleaning the SHM2 is that because it lacks any sort of splash guard or splatter cover, if you’re overzealous with the speed you can end up with ingredients splattered over the kitchen.

In its favour, removing the attachments with the eject button is as easy as it could be. Also the bowl and (we’ve presumed) all attachments are dishwasher safe as they’re made of good old stainless steel.

The SHM2 couldn’t be described as ‘quiet’, but it still performs reasonably well within this criteria. This is presumably due to the smaller motor, which are inherently quieter than the enormous 800W+ motors to be found on full-sized stand mixers.

You’d struggle to have a conversation over the machine on any of the speed settings, but it’s definitely not offensively loud like some machines on the market.

This is where the Breville SHM2 really excels. Its small dimensions make it ideal for storing away in a cupboard and it won’t take up too much space on a worktop either. The appliance measures 25cm wide by 34cm long by 31cm tall, which is much smaller than we had expected.

The whole thing (stand included) weighs a miniscule 3kg, so moving it isn’t an issue.

Occasional bakers are sometimes a bit daunted by the size of modern mixers and quite frankly their capacities are verging on professional volumes. So it’s refreshing to see something a bit more modestly proportioned aimed towards that market. 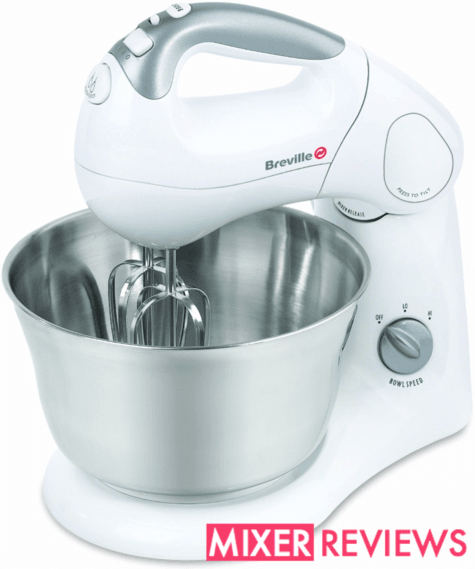 The appearance of the SHM2 isn’t handicapped by its flexibility

In our opinion the Breville SHM2 is an attractive appliance and certainly one that belies its low price point. The white plastic casing feels good quality and wipes clean easily.

In addition to the white colour, it’s also available in cream (see here), which may match some kitchens better.

It isn’t highly advertised, but the SHM2 does come with a standard 1-year warranty (just remember to keep the receipt!), protecting you against manufacturing defaults and breakdowns.

One thing to be conscious of are the weight limits of 1kg for dry ingredients and 2L for liquids. Going beyond this will reduce the life of your machine by causing the motor to generate excess heat, damaging the motor itself and the drive mechanism.

Stick within the limits and the long-term durability reports on the SHM2 are excellent, and buying from a trusted manufacturer like Breville always gives a certain piece of mind.

For those who don’t want to spend a small fortune on the likes of a Kenwood, aren’t planning on using professional-sized recipes or if space is at a premium, the Breville SHM2 is a great choice. Be careful not to overpay though, this store is by far the cheapest at the time of writing.