The Andrew James 7 Litre Automatic food mixer sits at the top of Andrew James’ limited stand mixer range. It stands out from the crowd with an automatic digital display and that enormous 7-litre bowl. Add to that a discount that we still struggle to believe (this store) and it certainly warrants further investigation. The information available about this machine online is not as detailed as it needs to be, even on the Andrew James website, so hopefully this review will help to make your mind up. 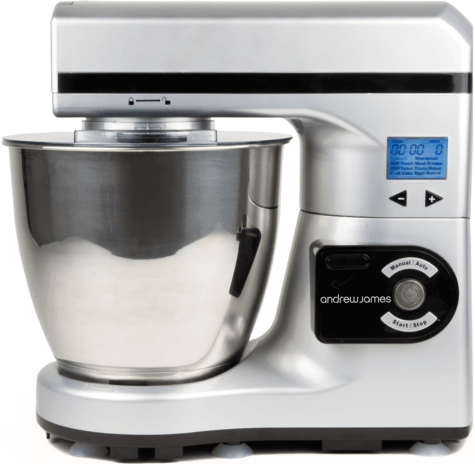 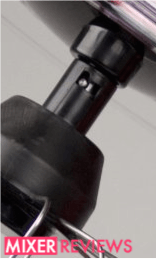 Attach mixing attachments through a push and twist motion

The mixing attachments for the Andrew James 7 litre are easily secured to the bowl power outlet by pushing the end of your chosen attachment into the short sprung tube and twisting to lock it into place.

Unlike lower-end Kenwood mixers you get four mixing attachments included, rather than three. These are: 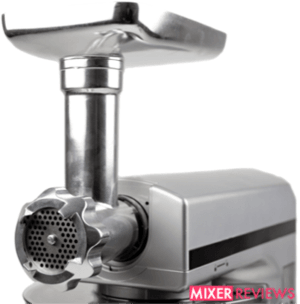 As opposed to the smaller Andrew James 5.2 litre, this mixer has an additional power outlet on the ‘nose’ of the machine that can fit either a meat grinder or multifunctional pasta maker, which are both reasonably priced (you can buy them from here). Unfortunately there’s no medium or high-speed outlet for a food processor or liquidiser, but these are available separately at low cost anyway, in-fact most people will already have one, so this doesn’t bother us too much.

Now let’s take a look at that enormous solid stainless steel mixing bowl, which to the best of our knowledge at 7 litres is the largest bowl of all the domestic stand mixers available in the UK. It’s practically a bucket! The great thing about it is that because it’s quite tall and narrow, it doesn’t take up too much space (although obviously it does make the overall machine quite tall) and ingredients don’t get spattered too far up the sides. Of course it locks into place on the base and is simple enough to remove with a twist.

Sitting over the bowl is the removable splash guard. Due to the bowl being so tall it isn’t called into action as much as with other machines, but it still does a good job of stopping flour and icing sugar from billowing out onto the worktop. Thankfully there’s a hole in the splash guard to allow ingredients to be poured in while it’s mixing, but there’s no flap that covers this hole, which means that as you’re standing over the machine you can get hit with an errant splash. 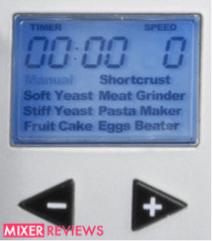 The digital controls on the Andrew James 7 Litre are unique to this model. The first thing to note is, it’s still relatively simple to use the machine in ‘manual’ mode if you prefer. To use the manual mode:

This is simple enough to get the hang of, but more tedious than appliances with standard rotational dials. To get the most out of your machine it makes sense to utilise the automatic features, which are quoted in the instruction manual as follows:

These modes run on a handy timer, allowing you to leave the mixer alone and get on with another task. As well as individual timers, each mode has its own speed setting as well. This means that to run one of the above functions, all you need to do is push the on/ off button twice, then press the ‘+’ and ‘-‘ to select the desired function, then press the start button and you’re away.

The only thing that’s dishwasher-safe is the mixing bowl, although finding space for that in your dishwasher may not be easy! The attachments will require hand washing, but their simple designs make this task as easy as it could be. It’s great that the splash guard can be removed so it can just be put in with the rest of the washing up. Thanks to the splash guard the machine only rarely requires a wipe-down after use.

In addition to the lack of dishwasher-safe parts, there’s only one other negative with regards to cleaning. This is that the only way to hold on to the attachments to remove them (just push up and twist) is to grab to actual mixing area, which means that unless you’re kneading dough, your hands get covered in sticky, but hopefully tasty ingredients.

The Andrew James 7 Litre comes with a 1000-Watt motor, so we would never expect it to be quiet, and it isn’t. It’s definitely noisier than the cheaper Kenwood models, but it’s not deafening or offensive, the noise is just something that you put up with. On the slower speeds you could have a conversation in the same room, but the same couldn’t be said for the higher speeds.

There’s no denying that this is a large mixer. It has dimensions of 38cm long by 24cm wide by 37cm high. There are a couple of machines from other manufacturers that have a larger footprint, but I don’t think there are any that are as tall as this one, which is entirely down to the very tall bowl. This means that it is a bit awkward to store in cupboards with shelves in them, if that’s where you’re planning to store it.

It weighs 6.7kg, which is manageable and about the weight that we’d expect. Thankfully the machine is mounted on six sucker-feet, which holds it very steady, despite its height.

The Andrew James 7 Litre comes in either silver, red or black

I feel that this is the best-looking mixer that Andrew James produce and I’d have no problem keeping it out on my worktop permanently.

Of the three colours, silver is the most popular, followed closely by the red. There’s no difference in price so it falls purely down to personal preference.

Andrew James publish the maximum recommended running time for heavy mixtures in the instruction manual. This states that you should only use the mixer for four minutes before allowing it to rest for 10 minutes to cool-down. It also recommends that you use the dough hook, rather than beater bade for heavy mixtures. Not following this advice will degrade the motor and the gearing/ drive mechanism, which can be susceptible to heat degradation. However, this advice could be frustrating depending on the recipe, as you may need two or even three four-minute spells to complete the necessary task.

The manufacturer also states the maximum amount of ingredients that should be used, but the amount differs depending on where you look. In the instruction manual it states this as a whopping 4kg, but some stores are reporting it to be 5L of liquid or 2.5kg of mixture. I’d lean on the side of caution and go with the latter recommendations. This is higher than the maximum recommended amounts of most other machines and again, you should stick within these to prolong the life of your machine.

The quality record of the Andrew James 7 Litre is pretty good, but not outstanding. What keeps the machine scoring highly is the top-notch customer support in the event of something going wrong, which appears to be much better than the support given by the more established manufacturers. Also, despite its low price-point the machine comes with an impressive two-year warranty, which is again better than the competition and gives significant peace of mind.

There is no doubt that this is an impressive mixer. It is powerful, has a large capacity and a good range of functions and is also backed by a generous warranty and support. It doesn’t have the prestige of some of the other brands, but you’ll need to pay considerably more if you want that. The best price we could find was at this shop, and for that amount of money it has to be worth giving it a go. Enjoy!