Recently we’ve seen the Andrew James 5.2 Litre Mixer be offered at a ridiculous, surely-too-good-to-be-true price at THIS STORE. That’s much less than half the RRP and would rightly cause concern regarding the quality, longevity and practicality of this kitchen machine. This Andrew James 5.2 Mixer Review will see if it really is a bargain. 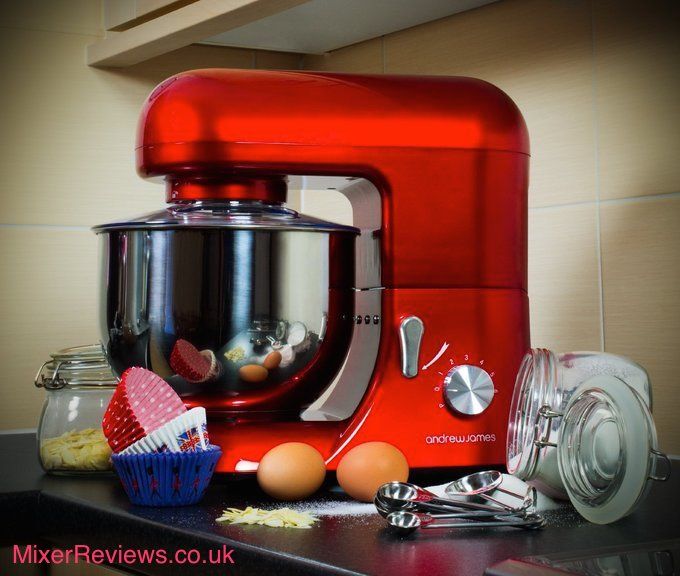 The Andrew James 5.2 litre mixer is a gorgeous machine in any colour

This mixer comes with four attachments, which are all pretty easy to attach by pushing the end of the attachment into the spring-loaded fitting protruding from the splash guard and then twisting and releasing to lock it into place. If you’re working with very small amounts then all of the attachments will struggle (although the flexible beater is best) as they don’t extend quite to the bottom, however this is the case with most mixers. 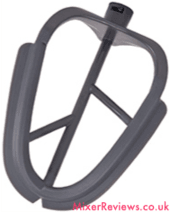 A new attachment for Andrew James – the flexible beater blade

While with the above attachments the machine has got all of the mixer bases covered, unfortunately there isn’t an ability to purchase additional functionality such as a mincer or chopper, but this is to be expected from a bottom-end machine.

The stainless steel mixing bowl is 5.2 litres in size, which a little bigger than the competition and should be more than enough for most. In all likelihood bakers will already know if they need a bigger bowl, if you’re not sure then a bowl bigger than this would almost certainly be overkill. It locks into place fairly easily by dropping it into the slots and twisting until it locks.

It’s great to see that a proper removable splash guard has been added to this model, as in the past Andrew James has relied on smaller guards that formed part of the actual attachments and were not very effective. Thankfully there’s a hole in the guard so that ingredients can be poured in during mixing. 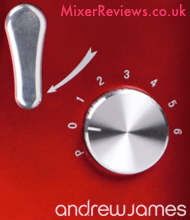 There are six selectable speeds to choose from depending on the task at hand and the consistency you’re looking. While many other mixers offer finer adjustment of the speed, the six on offer here should cover all bases. The pulse mode is great for those times when you need to be more precise, for example, when adding flour to a dough mix.

Go under the hood and there’s an 800 watt motor, and what Andrew James call a ‘robust gear mechanism’… Hmm, well judging from the noise that the gears produce when the machine is in operation (more on that later) those gears are going to need to be robust as they produce one heck of a noise.

As mentioned, it’s easy to remove the bowl, attachments and splash guard for cleaning, although you have to grab the attachments to twist them out, which will be messy unless you’re working with a dough. With some mixtures you’ll find that you need to go around the outside of the bowl with the provided spatula to clean the mixture off. The stainless steel mixing bowl is obviously dishwasher safe, but I’d hand wash the other parts.

The noise a mixer produces is the biggest indicator as to the quality and refinement of the components and engineering without stripping it down to it’s nuts, bolts and gears. As you’d expect for this price, the Andrew James 5.2 is rather noisy when in operation, particularly at higher speeds when you may wish to leave the room. The actual noise wouldn’t stop me off from buying this or any other mixer, but it does raise doubts as to whether it’s built to last. There’s more on this durability of the machine later in the review.

The mixer tops the scales at 6.5kg, which is fairly light compared to the competition, with the plastic rather than metal casing being the major contributing factor. At this weight lifting it onto the worktop from a cupboard above or beneath isn’t too difficult a task.

It has a footprint of 35cm long by 19cm wide and measures 36cm from the worktop, all of which make it one of the smallest mixers available and ideal if you’re planning to site it on your worktop permanently.

This Andrew James mixer doesn’t look as professional as Kenwood mixers or those from other manufacturers, but that’s not to say it isn’t good looking. The machine would look good on any worktop and you’re sure to fool people into thinking the machine cost considerably more than it did. The only thing I’d say with regards to the colours is to steer clear of the silver as it looks a bit cheap.

With regards to durability the most important aspect is a decent warranty and that’s what this mixer comes with, with a two-year fixed warranty covering new parts and labour required to fix your machine. Andrew James will cover the shipping costs of sending it back for repair within the first year, but you may need to cover this in the second year.

With the machine being so cheap and also the load noise it produces during operation, I had my doubts regarding how long this mixer would be able to last under normal usage. However it seems that for the vast majority of customers it’s performing well right through the long warranty period and beyond. Also, with this mixer being half the price of some of it’s competitors, even if it was to last half the time of those you still wouldn’t be out of pocket.

One thing to pay very close attention to are the Recommended Running Times (RRT) of each of the speeds. I won’t quote these here as they are subject to change, but running the machine beyond these times is very likely reduce the life of your mixer. Some advise to feel the casing where the motor is to feel if it’s getting hot, which is OK for the motor, but doesn’t tell you anything about the damage that is being done to the gears and drive belt.

I could be picky and explain why you should go for some other mixer because it’s better in this way or that, but if you’re seeking a mixer for general purpose mixing and nothing fancy beyond that and are not wanting to spend hundreds then the Andrew James 5.2 Litre Mixer is a great choice, provided you can buy it for a rock-bottom sale price of course (RRP £199). We found that by far the best price was at this shop, so make sure you check that out and don’t overpay.